Players are given a packet that contains a map of downtown Denver and a series of puzzles. The map shows several marked locations and each puzzle can be completed with information findable at one of the locations. The puzzle solutions can be plugged into a meta puzzle that yields an answer phase confirming the players’ “street smarts.” 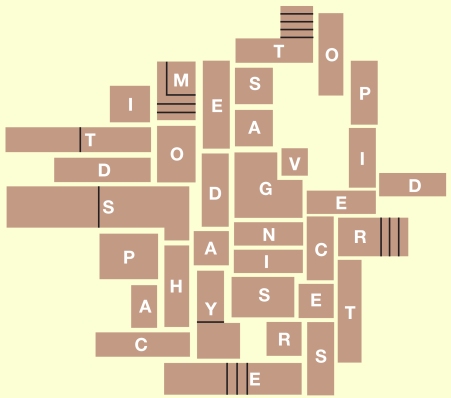 Street Smarts was presented in September 2008. My game party guests did well with Bug Hunt the previous year so I decided to try an outdoor “walkaround” puzzle hunt similar to ones I had played at NPL conventions and at the Dave Berry hunts in Miami and Washington. The hunt’s five puzzles could be completed in any order though the puzzle locations on the map steered most teams to start at the Pavilions and City Center Park and then return up 16th Street to the Performing Arts Complex, Skyline Park, and Union Station. I was pleased with the Pavilions puzzle: players were given a series of photos taken within the mall and had to determine the compass direction and Photoshop-removed letter associated with each photo. The letters could then be placed in a compass rose to determined an answer message. Less successful was the word maze based on the stepping stones in and around the Skyline Park fountain. It was a good puzzle concept but needed better instructions. The meta puzzle was a simple acrostic word grid and most teams were able to get the final answer after completing four of the five puzzles. The Performing Arts Complex puzzle was based on a temporary promotional banner and the Union Station puzzle involved a train photo exhibit that was removed when the station was renovated in 2014 but the other puzzles are still solvable.