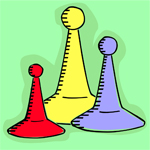 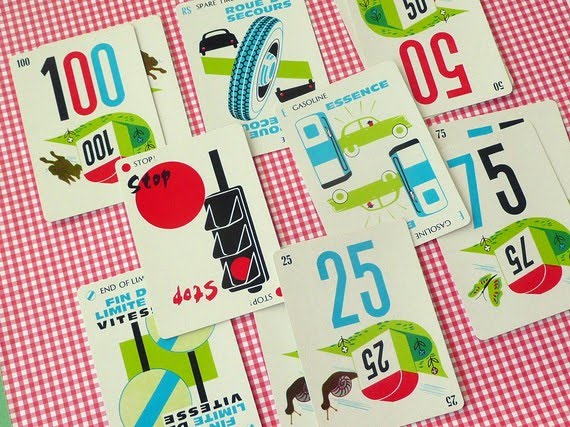 The questions are inspired by types of cards in the game Mille Bornes, though familiarity with the French auto racing game is not required. The notation “11C” refers to Merriam-Webster’s Collegiate Dictionary, Eleventh Edition.

Research is not allowed. Reasonably close spelling is acceptable unless otherwise indicated. Email answers to me at tmcay [at] comcast.net before 11:59 p.m. (MT) Saturday, March 12.

1) Go
The Oxford English Corpus is a massive survey of English language usage, pulling data from literature, journalism, and Internet discourse. A ranking of the most commonly used English words has been derived from analysis of the Corpus. The 100 most common English words in this ranking include 21 two-letter words. The most common of these words is “be”; per the ranking system “be” represents all of its other verbs forms including “is.” Choose any of the other 20 two-letter English words ranking in the top 100.

2) Accident
The following quotations appear in the list25.com article “25 Accidental Inventions That Changed the World” (David Pegg, May 14, 2012). Choose one of the quotations and identify the associated invention. Enumerations for the inventions appear in parentheses after each quotation. Quotations are lettered for convenience; you do not need to indicate a particular quotation in your answer.
A –  “…Nobel accidentally discovered a method of…” (8)
B – “…because they were soggy. In an attempt to teach the customer a lesson, Crum sliced them extra thin…” (6 5)
C – “… play with for decades was originally intended as wallpaper cleaner.” (4-3)
D – “…running out of plates while the neighboring Persian waffle stall…” (3 5 4)
E – “…Roy Plunkett, a chemist who worked for DuPont in the early 20th century for accidentally stumbling across…” (6)
F – “…and when he came out in the morning he found his mixture frozen with the stirring stick…” (8)
G – “…Before turning out the lights one evening Charles Goodyear accidentally spilled…” (10 6)
H – “…Art Fry, realized that it would be perfect as a no-slip bookmark…” (4-2 4)
I – “…when he felt the chocolate bar in his pocket start melting.” (9)
J – “…Kellogg began helping his brother cook meals for patients at the Sanitarium at which he worked, he ended up accidentally…” (4 6)
K – “…was on a hunting trip with his dog when he noticed how burrs would stick to its fur.” (6)
L – “…accidentally knocked a flask off of his desk it fell to the ground but rather than shattering…” (6 5)
M – “…he accidentally dropped one of them. To his amusement the spring immediately righted itself…” (6)

3) Out of Gas
Choose one of the lettered photos below and identify the fictional character represented by the Macy’s Thanksgiving Day Parade balloon in the photo. Your answer must include the letter of the chosen photo. ENLARGED IMAGE 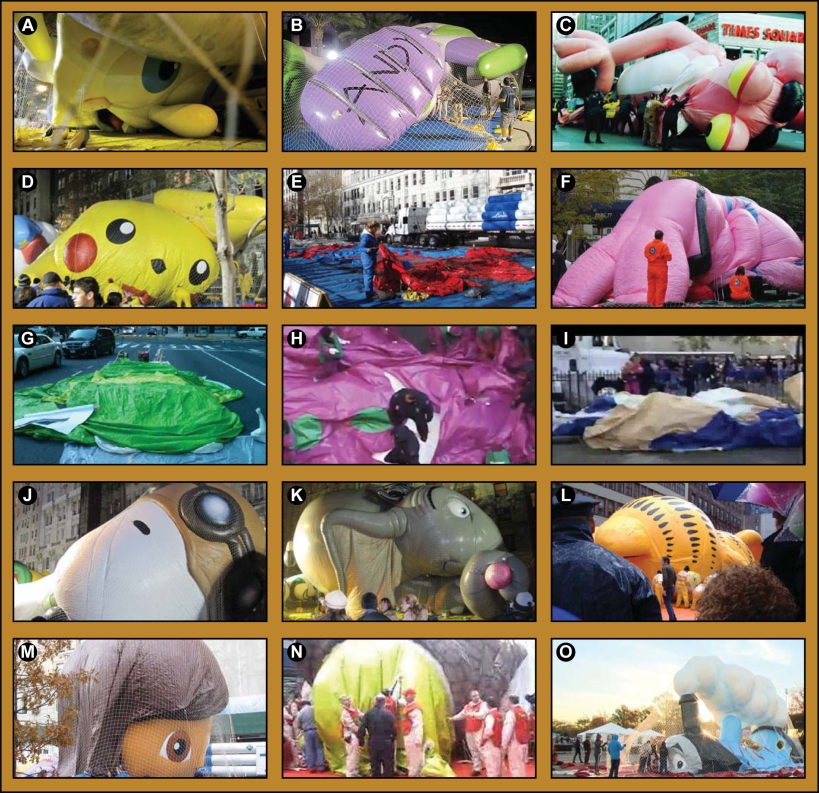 4) Flat Tire
The following fictional characters encounter flat tires in film, either as a driver or offerer of roadside assistance. Choose one of the characters and identify either the film title or the actor (first and last name) who portrays the character; choose one or the other, not both. Characters are lettered for convenience; you do not need to indicate the character in your answer. Film titles and actors are considered separate answers for scoring purposes. The years of the films are provided in parentheses.
A – Peter Warne (1934)
B – Joe Gillis (1950)
C – Humbert Humbert (1962)
D – Clyde Barrow (1967)
E – Wyatt/”Captain America” (1969)
F – Brad Majors (1975)
G – Jonathan Kent (1978)
H – Ralphie Parker (1983)
I – Phil Connors (1993)
J – S.F.C. William James (2008)

5) Speed Limit
Choose a single-word, 11C entry that is Italian in origin and is defined as a direction in music related to tempo or change in tempo. Do not choose a multiple-word entry (e.g. “meno mosso”), a direction that is used as a modifier for another direction (e.g. “assai” or “molto”), or a direction that relates to style, volume, or a playing attribute other than tempo (e.g. “fortissimo” or “legato”).

7) Extra Tank
The pictures below feature some popular types of freshwater aquarium fish. Choose one of the pictures and identify the type of fish. As a solving aid, the names of the fish appear below the pictures as transadditions, i.e. anagrams with one extra letter. Alternate names for the types of fish (names that do not form the given transadditions) will not be accepted and spelling counts. ENLARGED IMAGE 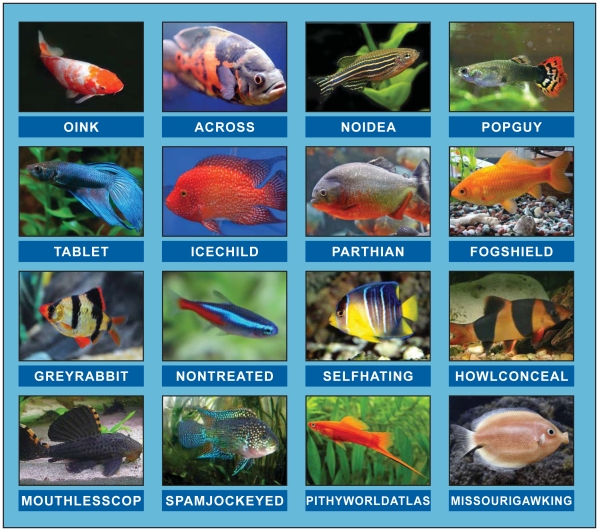 8) Driving Ace
Golf will be introduced as a medal sport at the 2016 Summer Olympic Games in Rio de Janeiro, though more accurately it will be re-introduced since golf was played at the 1904 Summer Games. Besides golf, sixteen sports played at the Rio Games this year will be ones with an introduction year of 1972 or later — this includes re-introductions of sports that experienced hiatus for one or more Summer Games as well as sports that may have been played at Summer Games before 1972 solely as demonstrations. Choose one of these sixteen sports.

The IOC definitions of a “sport” can be tricky, and problematic answers will be handled as follows: If an entrant submits a valid “event” belonging to an Olympic sport then the answer will be converted to the relevant sport and scored accordingly. If an entrant submits a sport “grouping” then the entrant will be asked to be more specific. Being more specific will not involve clarifying gender or distance.

10) Stop
The lettered images below are segments of subway transportation maps representing fifteen major world cities. The maps were cited in a February 2016 Science Advances article as part of a study of cognitive networking and map complexity. The maps are ordered from most complex (A) to least complex (O) per the study’s findings. Choose one of the images and identify the major city that the subway system services. Your answer must include the letter of the chosen image. ENLARGED IMAGE 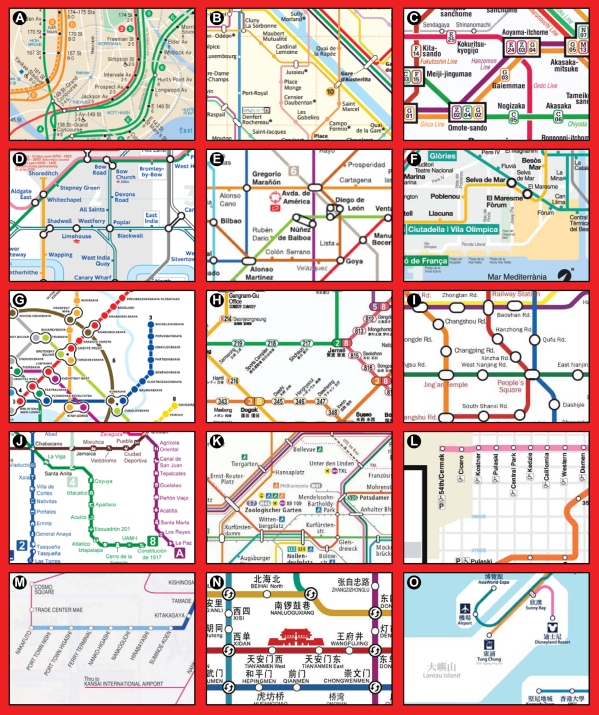 Tiebreaker
Edmond Dujardin grew up in Lille in northern France but he later moved to Arcachon on the Bay of Biscay and, in a former fish cannery, began manufacturing card sets for his newly invented game Mille Bornes. What is the distance, in kilometers, of an automobile trip on the A10 from Lille to Arcachon? Tie scores will be broken by the answer closer to the correct distance. 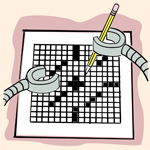 NOTES: Mental Floss ran an article last week about popular Valentine’s Day Internet searches associated with each of the fifty states. The results provided some good word list additions such as couples yoga (80), the top-searched item for Colorado. I decided that the West Virginia entry cheap gifts (-) was a bit to green-painty. Word Spy recently posted a new slang term for hoarding: stuffocation (70). It’s a too-cute portmanteau but I mainly added it because it comes from a James Wallman book title. The astronomical discovery of a planet nine (72) from a few weeks ago finally got added. I hope that astronomers acquire stronger evidence of this solar system rogue very soon so we can have a new planet to name.

LISTS: I’m still working on a chuck of Mark Diehl entries and recently added Hilton Head (75), HTML editor (65), ostrich egg (75), and pencil-thin (65). One entry that three me for a second was loose teeth (63). I couldn’t grasp the meaning of the phrase until I thought of the singular form. While many *tooth phrases feel as natural as their *teeth counterparts, I find that a few lean one way or the other. It’s based on whether the dental phenomenon is associated with multiple instances in the same mouth, thus “buck teeth” is better than “buck tooth,” but “first tooth” is better than “first teeth.” So maybe “loose teeth” seems strange because people don’t have multiple loose teeth simultaneously (or so I assume based on my personal dental history). 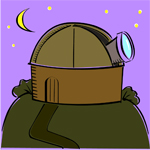 A couple of items related to crossword puzzle databases were posted in social media recently.

Jim Horne’s XWord Info reference site now has a downloadable word list compiled and scored by Jeff Chen. The list contains 163,374 entries from published New York Times crossword puzzles, variety puzzles, and acrostics as well as many entries from Jeff’s private list. The entries are scored on a range from 5-60. Angel-level supporters of XWord Info can download the list for personal crossword use.

Peter Broda mentioned his website Cross Examination, a work-in-progress repository of entries and clues collected from independent crossword venues. The site features a wildcard-enabled search field that returns entries and clues with annotations of the constructors and sources. Entries are also ranked according to Peter’s scoring system. The site does not accommodate list downloads but visitors can contact Peter if they are interested in acquiring the data files. 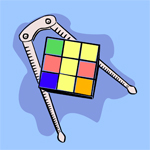 The American Crossword Puzzle Tournament is about two months away. One of the highlights of this year’s evening entertainments is an Escape Room designed by Eric Berlin. I won’t be attending the tournament and I’m curious to see what Eric comes up with for this activity. Escape rooms are trendy at the moment and the label offers commercial value for a range of puzzle and game tie-in enterprises. Puzzle books based on escape rooms are being planned (Christopher Manson’s Maze could be a prototype of the genre) and “Host a Murder Mystery” box games are being re-branded as “Host an Escape Room.” Among business that offer escape rooms, there is a great variety in the level of theme, and by “theme” I mean physical and sensory immersive detail. This variety introduces an interesting question: what is the difference between an escape room and a puzzle activity that is inspired by the concept of an escape room? Different people would have different answers to the question based on experience and expectations. Participants of Eric’s ACPT activity may describe their experiences in various terms but I’m sure they will all have a great time.

Teams are given a packet that contains a map of the Cherry Creek North shopping district and a series of puzzles. The map shows several marked locations and each puzzle can be completed with information findable at one of the locations. The final puzzle is a long series of instructions that use the solutions to the previous puzzles as data inputs. A team that successfully completes all of the instructions receives an answer phrase identifying the accomplishment. 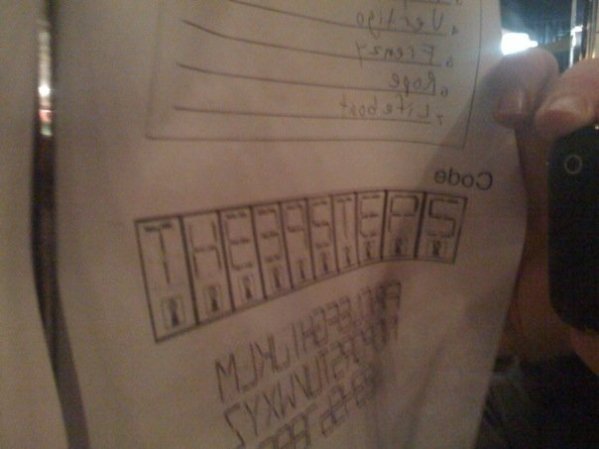 After the positive reception of the original Street Smarts event in 2008 I planned a sequel the following year. The hunt coincided with my 39th birthday so I chose “The 39 Steps” as a final answer and included references to other Hitchcock films throughout the 39 word transformation instructions comprising the meta puzzle. I was overambitious in designing the early stages of the event as I created eight puzzles to solve in various locations throughout the Cherry Creek North area. Few teams were close to completing all eight before the scheduled wrapup at California Pizza Kitchen, so I encouraged teams to combine and share information in order to complete the meta during dinner. The early puzzles included a word grid formed from a knickknack shelf in the JW Marriott lobby, a face carving identification puzzle at a plaza fountain, and a rainbow-themed letter extraction puzzle using a statue of a child reading a Wizard of Oz story book. My favorite puzzle involved a series of storefronts that needed to be identified from aerial-view photos taken from a rooftop parking lot. The starting point for the event was a Starbucks coffee shop that is about four blocks from another Starbucks, so I posted an “alternate universe” puzzle in the second Starbucks location. A word search puzzle solution directed solvers to find a compartment next to the drive-thru lane of a bank. On the day of the hunt I had hidden slips of paper in the compartment underneath a stack of bank deposit envelopes (the slips of paper had holes cut out, and overlaying the paper on the word search revealed the puzzle answer). One solver had to leave the event early, but he returned to Cherry Creek North about a month later to see if he could finish the puzzles. He reported that the paper slips were still in the bank compartment. Some slips could still be there today for all I know.