I haven’t shaved my face since Halloween. No-Shave November is an opportunity to raise cancer awareness and check on the gray and patchiness in one’s potential goatee but that’s only part of the reason why I decided to put aside the razor for a few weeks. I’m also indulging in the superstition of a “playoff beard” to bring good luck to my team, and in this case the team is Puzzah! My puzzle room employer is scheduled to open its second location on Black Friday and we’ve been working hard this week to get our space in Flatiron Crossing mall ready for patrons who may want a puzzle break during their post-Thanksgiving  shopping sprees. This new location is a significant financial risk for the company and if scruffy face will bring us success then I’m willing to do what I can.

Puzzah! Flatiron Crossing in Broomfield, Colorado, has spaces for four adventures. Two adventures will be available on opening day: the science fiction-themed Specimen and archaeology-themed The Curse. The adventures for the other two spaces are in development and will be installed early next year. Our general contractor has been prepping the space for the last few months. This week the drywall, flooring, ceiling tiles, wiring, fire inspections, and lease paperwork were all completed, and we began loading in all the things that will turn this blank canvas into a set of live-action puzzle adventures. 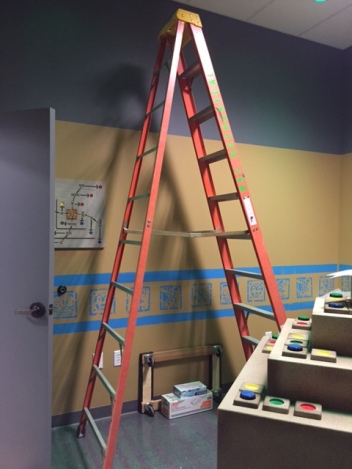 The load-in went smoothly. I was reminded of hauling set pieces from the workshop to the auditorium during tech week of college theater productions. As we started organizing things at Flatiron Crossing we encountered the typical laundry list of installation snags. A prebuilt piece turned out to be a hair to wide for a doorway it needed to go through. An electrical outlet was not at the right wall height for a display. A light fixture transformer was faulty. The team addressed these issues one by one and gradually the rooms looked less like construction zones and more like spaceship interiors and Mesoamerican chambers.

The development team was smart enough not to entrust me with any power tools, and I kept out of the way during the heavy-duty installation. When the equipment was in place I began primary alpha-testing, which was essentially making sure that players could access the puzzle elements comfortably and envisioning the solving process of teams. Later I worked with team members to test the light and sound systems in the room. The systems allow us to implement some theatrical effects for the first time, and it was fun to play around with light and sound cues for the various parts of the puzzle room narratives. One of the highlights of the A/V review was my initial glimpse of a light effect that our engineers have fondly named the “furtle.”

The origin of its name is reasonably easy to deduce. If you’re curious why we have a furtle then I recommend you make a reservation to play our room adventures once we’re open.

Alpha testing resumes on Saturday and beta testing begins on Sunday. If everything continues in a positive trajectory then I anticipate have much to be thankful for next Thursday. And, with the holiday season underway, I can relax a bit and start counting the days until I can shave.